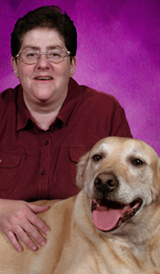 Pam has been serving as the Business Manager since 2008, but she has been with Clayton Veterinary Associates in varying capacities since 2006. She has a degree in Respiratory Therapy from Northeastern University and spent twenty years working in the human medical field before deciding it was time to spend her days with furry patients. Before working at CVA, Pam and her husband were foster parents for the State of New Jersey and cared for medically fragile infants & children. She is very active in charity and animal rescue organizations, serving as the Vice President of Save the Animals Foundation and fostering puppies and orphaned kittens for Gloucester County Animal Shelter. In her spare time, she can be found with her husband, five adopted boys and her large pet family of three dogs, seven cats, and usually a foster pet or two. She is also finally back in the barn with a new horse, appropriately named Chocolate. Pam is also an avid Dallas Cowboys fan (sorry Eagles!) and cannot live without chocolate, mountain dew or the color purple. 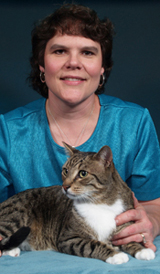 Cindy has been a graduate veterinary technician at CVA for more than 20 years. Originally from Lancaster County, PA, she graduated from Harcum College in 1989 while also completing practicums at VHUP and New Bolton Center. Cindy and her husband Brian are very active in their church. They have a son, Andrew, who is a 2018 graduate of the United States Military Academy at West Point.  She grew up a Mennonite in Lancaster County and loves to bake Pennsylvania Dutch treats.  She loves spending time with her family, and has season tickets at 2 theaters.  She does have problems remembering names and can often be heard referring to her co-workers as “that other girl”! 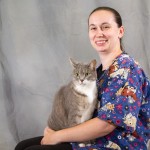 Carly has been with the practice since 2006.  She started as an assistant but has now completed the Veterinary Technician program at Camden County College and is a certified technician.   Carly is our resident food expert, helping clients plan appropriate diets for their pets’ needs.  She is also very skilled with raising orphaned kittens.  Other interests include horses and showing model horses.  In her spare time she volunteers for Furrever Friends, fostering and rescuing cats.  Carly is also a national Latin scholar. 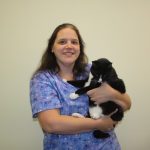 Kristy joined our team in 2013 as a licensed Veterinary Technician. She graduated in 2000 from Becker college with a degree in Animal Science. After graduating she has worked in several types of hospitals to experience all areas in the field.  She has recently become a certified technician and hopes to become specialized in dentistry or surgery. She currently resides in Gloucester County with her husband, two sons, and dog named Lily who was rescued when she was 3 months old after being hit by a car. Kristy is also a hard core coupon-er! 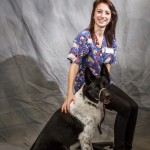 Samantha was born and raised in Franklinville and graduated from Camden County College with a degree in Veterinary Technology. She is still considering going to school to be a Veterinarian. She has also passed the VTNE and is a certified veterinary technician. Ever since Sam was a little girl, she knew she wanted to do something with animals. She remembers being in first grade when her teacher asked the class what they wanted to be when they grew up and she said “veterinarian” so she’d say she’s pretty consistent with sticking to her younger self’s aspirations. Her home life consists of helping to care for her brother’s Karelian Bear Dog, Kess. Her interests include drawing mainly using pastels, hiking on the weekends with friends, and archery. 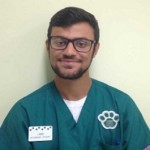 Our newest employee, Lambi joined our staff in May to do his summer clinical training for his 2 year Veterinary Technician program through Camden County College. We liked him so much we decided to keep him, so he is now one of our permanent staff.  He will be working part time while he finishes his last year of school.  Lambi lives with his family and a mixed breed rescue dog named Charlie in Cherry Hill. He loves fishing, spending time at the beach, and is a huge Eagles fan! Lambi has been to Greece many times and tries to travel there each summer. 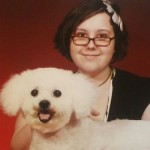 Audrey was born and raised in South Philadelphia but spent most of her 20s living in Virginia. She studied at the College of William and Mary with a major in Religious Studies. Audrey joined the CVA team in 2015, and currently lives in Pine Hill. Her interests are philosophy, ancient near eastern history, Jewish history, reading, writing, and creating art in various forms. Her favorite place to travel is Israel, and she would love to visit again soon! She has one dog of her own, a Bichon Frise named Molly, but shares a home with several dogs and chickens, one cat, and one tortoise. 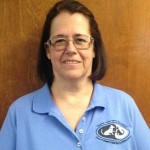 Martina lives in Blackwood with her husband and their four dogs: Nicki who is an Australian Shephard, Rocko and Savannah who are both Bernese Mountain Dogs, and Daisy who is a rescued pitbull from CCAS. Martina has been in the field as a receptionist for 15 years, but joined CVA in May 2018. In her free time she enjoys going to movies and concerts, and likes trying new foods and wines. 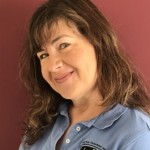 Penny joined the CVA team in April 2017, but has been a veterinary receptionist for 20 years. She enjoys going to concerts and the movies, and loves all things Disney! A New Jersey native, Penny currently lives with her family in Bellmawr. They share their home with an English Bulldog named Violet.

Randi has an associates degree from Camden County College in animal science. She has been with CVA off and on since 2004. In her spare time, Randi enjoys spending time with her husband, three children, and niece. She also enjoys the beach and photography. Randi’s family also shares their home with coonhound mix named Gypsy, a terrier named Nicky, and Vader the cat, who were all adopted locally. 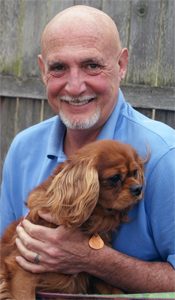 Hue is a Texan by birth, but now a Jersey boy by choice. Hue’s role at CVA is that of Facilities Manager, which he balances with his architectural practice. Hue also acted as architect and construction manager for the Pennsville clinic. He spends free time pursuing other artistic endeavors including painting, sketching, and gourmet cooking. Hue can often be found in the kitchen at the home he shares with Dr. Morgan, creating gastronomical delights for the family (including the four-legged children), enjoying dog walks, or sneaking out for the occasional trail ride on the horses. Additionally, Hue and Judy have expanded their passion for Cavalier King Charles spaniels and English Toy spaniels to volunteer with Cavalier Rescue. Hue is sharing the frame with Charley who started out as a foster, but never left the family! 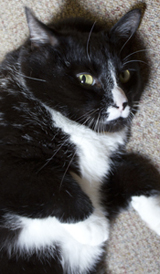 UV was born in Woodstown in 2002 and raised in Glassboro, NJ. He started out at Clayton Vet as a part time office assistant, but has since gone full time. His duties include supervising the staff, greeting clients, and rearranging paper work as he finds necessary. UV can most often be found “pretending” to sleep on his chair behind the reception desk as he supervises the staff. 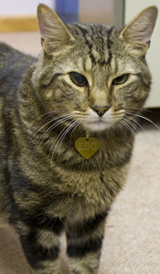 Edo was born in 2003 and is a native of Clayton, NJ. He is also a full-time employee at Clayton Veterinary Associates, where his primary duties include security surveillance and helping out behind the scenes. He enjoys sneaking, sleeping and eating cat treats. Edo is not often seen by clients, as his job requires supervising the technicians and doctors in the back of the hospital. 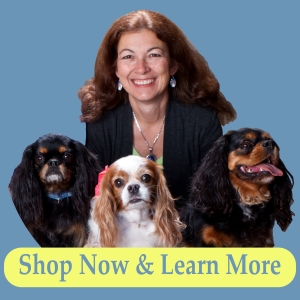